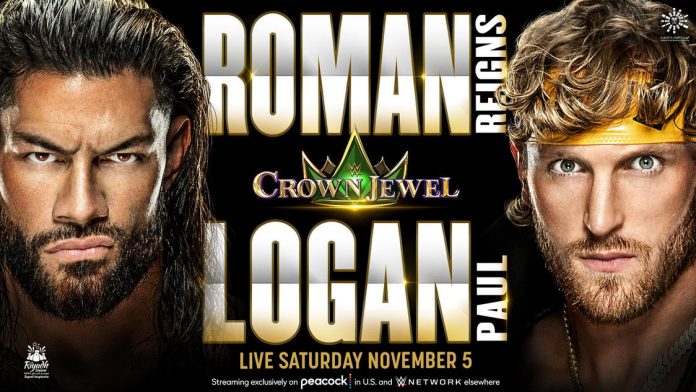 WWE is headed back to Riyadh, Saudi Arabia on Nov. 5 at 12 p.m. ET/9 a.m. PT for Crown Jewel headlined by Roman Reigns vs. Logan Paul. The event will take place in King Saud University Stadium, which can hold up to 25,000 people.

YouTuber turned WWE Superstar Logan Paul, in just his second singles match in WWE, will challenge Roman Reigns, for the WWE undisputed universal championship. Can Paul land that one lucky punch and end one of the longest reigns in WWE history?

Other notable matches on the card include a sequel to Brock Lesnar vs. Bobby Lashley from the 2022 Royal Rumble pay-per-view, a steel cage match between Drew McIntyre and Karrion Kross and the in-ring reunion of A.J. Styles, Karl Anderson and Luke Gallows.

Previous article
Mike Tyson Returning To AEW on Rampage
Next article
Watch: HHH attempts to stop Brock Lesnar and Bobby Lashley from fighting each other on RAW