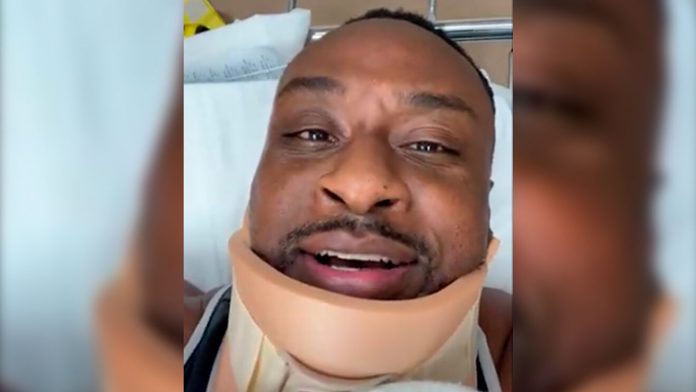 Big E suffered a broken neck during WWE SmackDown on Friday night, when the former WWE champion took an overhead belly-to-belly suplex from Ridge Holland and landed on the top of his head.

Prayers up for Big E. This was terrifying to see! Hope he’s okay 🙏 Match ended shortly after and PatMcAfee looked legit terrified pic.twitter.com/dGpb7mkJKx

After the incident, Big E left the Legacy Arena in Birmingham, Alabama, on a stretcher and taken to a local hospital.

The match ended shortly after Big E’s injury, with Holland and Sheamus winning via pinfall on Kingston.

In a video he posted to Twitter, Big E said he has has all feeling and movement in his arms and legs, but he said doctors informed him he broke his neck.

“I can’t thank all of you beautiful people enough, for all of your concern and your messages. It’s very heart-warming. I can move all of my digits, [wiggles fingers to camera] you see that? That’s nice, that’s always a good thing. Strength feels fine. But unfortunately, right now they tell me that my neck is broken, so there is that.

But once again, thank you everybody, I’m gonna be alright, I’ll be good. Don’t worry, go to sleep. Don’t worry about old me, but for real, thank you. I appreciate all of you.”