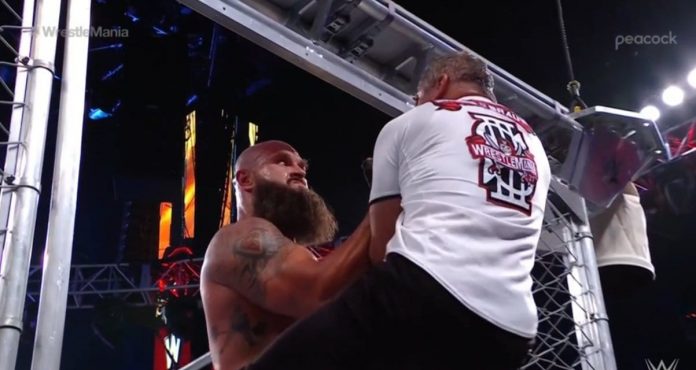 Braun Strowman defeated Shane McMahon in a steel cage match after throwing him off the top of the cage.

The build to this match has been lackluster. Braun Strowman was upset because Shane McMahon called him stupid. But at least we’re going to see Shane McMahon do something dangerous.

The match started with Strowman being attacked by Elias and Jaxson Ryker, who then handed McMahon a steel chair.

Strowman managed to stop McMahon from an early escape, but McMahon managed to grab a sheet of metal from the top of the cage, hitting Strowman with it several. Strowman again stopped McMahon from escaping the cage, finally getting the opportunity to toss McMahon around while driving in some big punches and a clubbing forearm to the chest.

Later on McMahon grabbed a tool box from out of a bag that was hanging near the cage and hit Strowman in the head with it.

McMahon then climbed to the outside of the cage and reached his hand in to wave goodbye, but Strowman jumped to his feet and grabbed McMahon’s hand, ripping apart the cage to drag McMahon back inside. Strowman then hoisted McMahon to the top of the cage, climbed up himself and threw McMahon off the top of the cage back into the ring.