Brock Lesnar has been indefinitely suspended on Smackdown 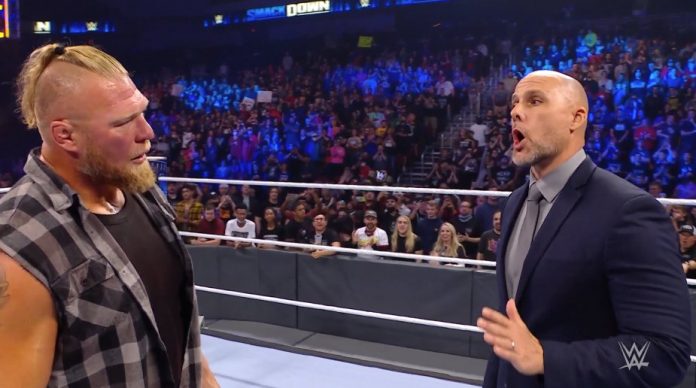 Roman Reigns kicked off Smackdown by addressing what happened at Crown Jewel.

“You holding that title for me, or for Brock? Because when I put my hand out, you did the right thing with the mic, but last night I put my hand out and you just throw the title in the ring,” Reigns said. “Should we work on this?  This is how it’s done. Afterward, he said, “awww, pretty easy right?”

“You’re not great at your job. You’re not, but I am” Reigns said.  “I don’t think there’s any denying it at this point. I’m the best of the best. I’ve carried this product, I’ve carried WWE on my back for over a year and a half now. I’m your Tribal Chief. I’m the head of the table! I’m the greatest Universal Champion of all time.”

Roman then dared Brock Lesnar to show up. After a commercial break, Lesnar went out to the ring and he attacked Reigns. He clotheslined Reigns over the ropes to the outside and grabbed the steel steps. He looked at Heyman and started walking toward him, but then smiled and slammed them into Reigns and then went to the announce table. He lifted Reigns but The Usos came out to break it up and they attacked Lesnar. He threw both into the post and barricades.

Brock then put his hands on a cameraman and he attacked referees at ringside. Adam Pearce had the whole Locker Room come out to take Lesnar down, but even they couldn’t stop him. Brock then lifted the Universal title as Reigns and the Usos left the ring.

It was later announced by Adam Pearce that Brock Lesnar has been indefinitely suspended for his actions on tonight’s show. For that, Lesnar lifted Pearce and hit him with two F5s.