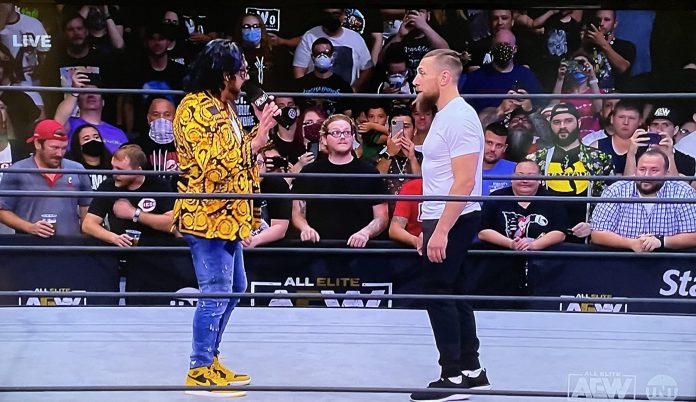 During Dynamite, The Elite head out to the ring for an interview with Tony Schiavone.

Don Callis takes the mic and started out by saying that The Young Bucks had their belts stolen, but they have a plan to get them back. Nick Jackson then says “speaking of getting thing back!” Nick Jackson went on to say that although they lost something, they got their best friend Adam Cole back.

#TheElite got their friend back – @AdamColePro is on #AEWDynamite NOW – Watch LIVE on @tntdrama pic.twitter.com/awyVFclFlT

Cole walks out to a loud ovation and gets on the mic and says he knows Tony Schiavone is friends with Britt Baker, but if he even looks at her again, he will whoop his ass. He then kicks Schivone out of the ring, “get out of the ring, nerd!” Cole says All Elite Wrestling is the greatest professional wrestling company in the world. It’s because of The Elite! Cole went on to announce that he will make his in-ring debut on next week’s AEW Dynamite.

#TheElite is complete with @AdamColePro, who makes his #AEW in-ring debut next week on #AEWDynamite – Tune in NOW to watch #AEWDynamite LIVE on @tntdrama pic.twitter.com/O42bmeCDRC

Kenny Omega began to speak but he was interrupted by Bryan Danielson. Danielson takes the mic and asks the fans if they want to see him go against Kenny Omega. Omega then takes his jacket off and goes for a swing and all out brawl begins with the Elite attacking Bryan. Jurassic Express, Frankie Kazarian and Christian Cage all ran out to save Bryan. The Elite cleared out to the floor and Luchasaurus launches Marko Stunt down on The Young Bucks. Cutler is the only guy left in the ring, Danielson then hits him with a running knee to send him out of the ring.