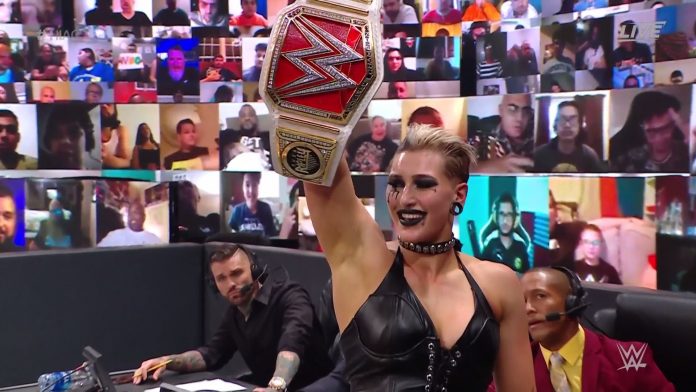 During the entrances, Charlotte Flair showed off some new gear inspired by Disney’s Maleficent. With black, purple, and a pointy robe, she really cemented her full queen look.

Flair attacked Ripley with the title before the match officially got started. Flair kept Ripley on the defensive, dominating the early action while taunting the champion.

Ripley’s comeback included a big dropkick from the top rope before locking in a high-angle Texas cloverleaf before Flair launched her into the turnbuckle. Flair followed up with Natural Selection and an attempt to use the middle rope for leverage on the pin.

Ripley, now dealing with an injured leg from the focused attack of Flair, managed to hit a superplex for a two count as the momentum continued to swing wildly.

Ripley eventually nailed her Riptide finisher, but Flair was able to drape her left leg over the rope to break the count. Flair then locked in a Figure Eight, but Ripley was able to drag herself and Flair out of the ring.

Ripley then pulled off the top of the commentary table and hit Flair with it, resulting in a disqualification and allowing Ripley to retain her title. Ripley continued the attack after the bell, eventually laying out Flair with another Riptide.