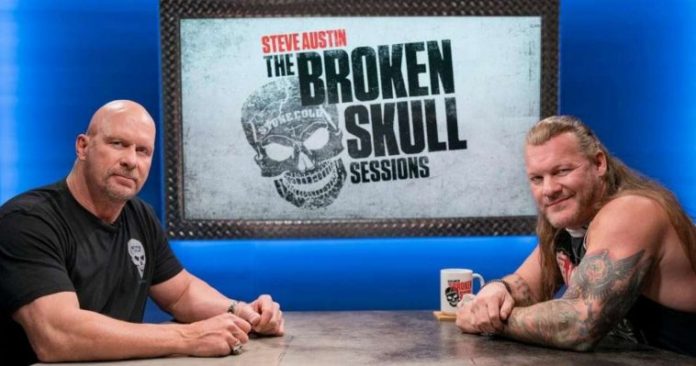 AEW’s Chris Jericho is going to appear on the next edition of WWE’s Broken Skull Sessions on Peacock and the WWE Network following the second night of WrestleMania 37 on Sunday.

“Having someone from there on a WWE show, especially the caliber of Chris Jericho, is pretty damn cool,” Austin says. “Chris spent almost 20 years in WWE. When you talk about best runs in the history of the business, Chris Jericho’s name is going to come up.”

While this will be a very interesting interview, the question remains, how did this come together?

“I was having a beer one night after my Broken Skull Sessions interview with The Undertaker aired, and out of the blue, Chris Jericho reached out and said, ‘Man, that was a great interview,’ ” Austin says. “I sent him back a couple of those emojis, one of a beer mug and the other of an eagle, and then he called me right then and there.

“We got to talking. I’ve always respected the hell out of his career, and I’m glad they’re around—it gives the guys and girls in professional wrestling more places to work. I said, ‘I’d love to have you on the show.’ And he said he’d love to do it, so I checked with Vince McMahon about it.”

This will be Jericho’s first appearance in the company since 2018. WWE teased Jericho’s sit-down interview with Austin with a countdown clock similar to the one that started Jericho’s original entrance in WWE: