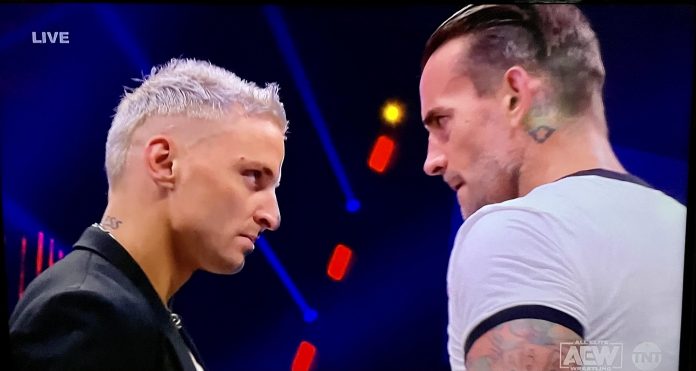 CM Punk came to the ring on AEW Dynamite to promote his match against Darby Allin at this Sundays All Out pay-per-view.

This match marks Punk’s first in-ring action since retiring from WWE in 2014. During his promo, Punk admitted to being nervous and scared, but promised that each time he laces his boots, he will give the fans the best he has.

At this point 2point0 and Daniel Garcia ran out and attacked Punk. 3 on 1 they got the best of Punk until Darby Allin and Sting came to Punk’s rescue. Punk, Allin, and Sting all hit their finishers.

They said they wanted a taste… Welp. #AEWDynamite pic.twitter.com/bypUGW6QoU

.@DarbyAllin and @Sting are here to aid @CMPunk against the attack from #2point0 & @GarciaWrestling

Tune in to @tntdrama NOW to watch #AEWDynamite! pic.twitter.com/3ZM5Gz5dSu

Sting then grabbed the mic and said he always wanted to share a ring with Punk because he respects him. After Sting spoke, he left the ring so that Allin and Punk could stand face to face.

A tense faceoff between @CMPunk & @DarbyAllin before their match at #AEWAllOut on PPV this Sunday!

Tune in to @tntdrama NOW to watch #AEWDynamite! pic.twitter.com/rbuwzUInFV