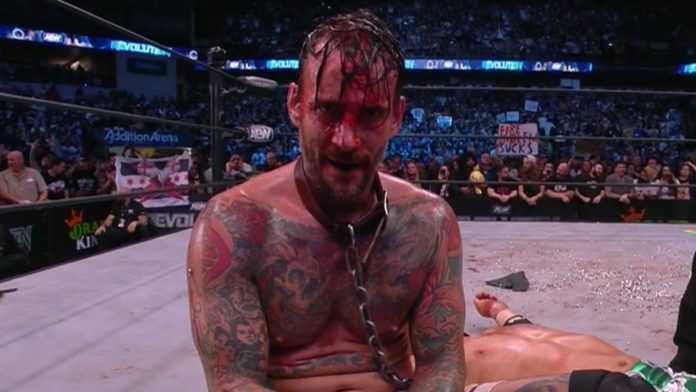 CM Punk and MJF are set for a brutal battle in a Dog Collar match at AEW’s Revolution pay-per-view.

The story of the match started with the ring introductions. Punk’s music hit, but it was MJF. Punk then entered the arena to AFI’s “Miseria Cantare” and wearing basketball shorts and a windbreaker, as he did with Ring of Honor.

Punk was the first to use the chain before MJF was able to drive the chain into Punk’s face, opening up the same cut from MJF’s attack earlier in the week. MJF then grabbed a microphone and demanded Punk tell the crowd he wanted to quit.

Punk fought back but MJF yanked the chain to pull Punk. He then used a chair to bust Punk’s head open. MJF grabbed the microphone and told “old timer” Punk to tell the people that he doesn’t care and he should quit. Punk said “ear shit Max.”

“Eat S**T Max” @CMpunk not giving in to @The_MJF here at #AEWRevolution! We are LIVE on PPV right now! Available on @BleacherReport & @FiteTV (Int.) pic.twitter.com/LB8UMnAI9S

The brutality continued to amp up with a methodical approach to everything before Punk hit a piledriver on the ring apron.

.@CMPunk sacrificing his own injured knee to deliver that vicious move to @The_MJF! #AEWRevolution is LIVE on PPV right now! Available on @BleacherReport & @FiteTV (Int.) pic.twitter.com/E5FGuhVezh

MJF poured thumbtacks in the ring. He hit Punk with a knee strike to the head. Both men teased going into the tacks before MJF hit a superplex, sending both men into the tacks.

MJF then called for Wardlow to help him. The big man came to the ring, and MJF asked for the Dynamite Diamond ring but Wardlow couldn’t find it. The distraction allowed Punk to hit the Go To Sleep. Wardlow then “found” MJF’s ring in his right pocket and he left it on the ring apron for Punk to grab. Punk knocked out MJF with a punch while wearing the ring, though not before MJF spit in his face.

.@RealWardlow with a convenient memory lapse during this #DogCollar match between @CMPunk and @The_MJF!#AEWRevolution is LIVE on PPV right now! Available on @BleacherReport & @FiteTV (Int.) pic.twitter.com/DR8ruIdvOJ