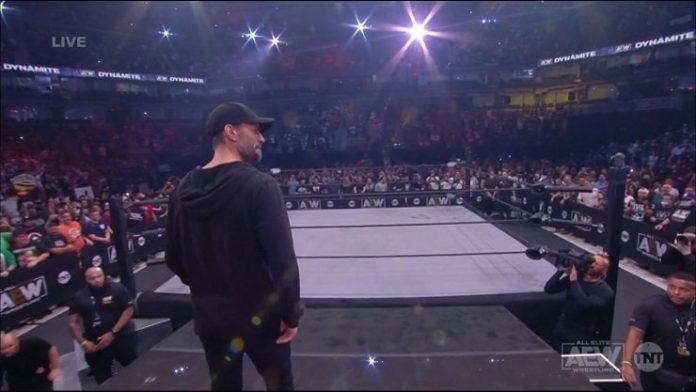 Punk said that he couldn’t follow the Kenny Omega vs. Bryan Danielson match that started the show. Punk went on to say that it’s been quite some time since pro wrestling has been in  New York. He says people want the Old CM Punk, but be careful what you wish.

Punk said he is mad about being slammed on a table by Hobbs last week that Team Taz tried to take “all of this” away from him because they don’t want to see happy CM Punk who enjoys professional wrestling fans.

Punk added, “it’s so long since I’ve needed this” and nobody will take this from him because “this is mine once again.” He added that Team Taz let him live and now he will tuck them in at Rampage: Grand Slam and Hobbs will go to sleep.

Be careful what you wish for – @CMPunk is pissed off at #TeamTaz and @TrueWillieHobbs – Watch #AEWDynamite: Grand Slam LIVE NOW on @tntdrama pic.twitter.com/vRDNJ2CWfr