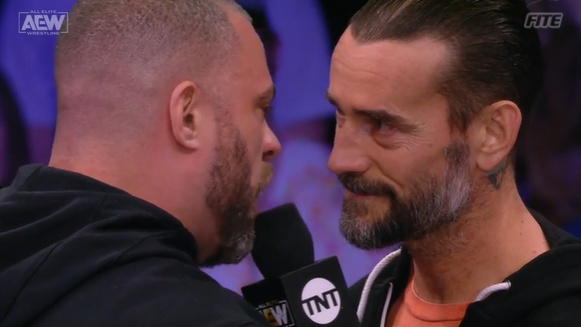 All Elite Wrestling is set to return to PPV with it’s Full Gear pay-per-view from Target Center in Minneapolis, MN on November 13, 2021.

On Tonight’s AEW Rampage, CM Punk was in the ring for the Face to Face with Eddie Kingston. The two have been feuding for a couple of weeks and tonight things came to a head.

In the ring, Punk demanded Kingston come out and apologize to him for what happened last week. Last Friday night Kingston, upset over losing in the World Title Eliminator tournament to Bryan Danielson, loudly disrupted a Punk interview being conducted by Tony Schiavone.

.@MadKing1981 makes the challenge to @CMPunk for #AEWFullGear and it all BREAKS DOWN! Watch #AEWRampage LIVE NOW on @tntdrama pic.twitter.com/dn8Xwa8IqZ

After some delay, Kingston finally came down to the ring and grabbed a microphone. He explained that he’s different from Punk, and didn’t have to stab others in the back like Punk did to get where he was. After the two continued to exchange words in a very heated promo, Kingston issued the challenge for Full Gear, with Punk accepting.

Before they left the ring, Kingston said that when he beats him next weekend, Punk should lave AEW and “go away for another seven years” again, goading Punk into headbutting him, kicking off a pull-apart brawl. Kingston wants to fight Punk and he doesn’t care about winning or losing.