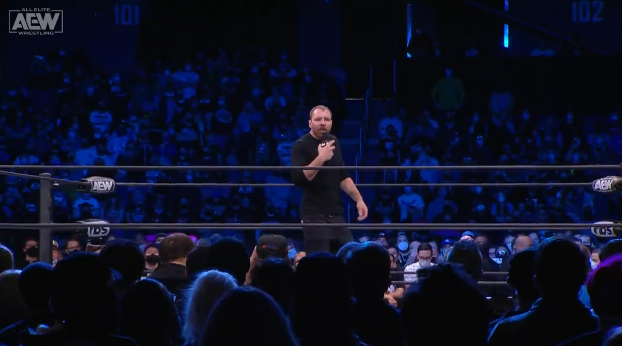 Jon Moxley opened the January 19 episode of AEW Dynamite after returning from alcohol rehab he entered in November, 2021.

Mox kicked off his speech by getting a fan kicked out of the building who was heckling him. “Hey, go f*ck yourself,” Moxley said, “Get that guy out of here.” This fan couldn’t be really picked up on the microphone, but Jon Moxley certainly heard whatever he had to say.

On the mic, Mox addressed his absence, thanking everyone who stuck by his side. He then talked about how he had a black cloud hanging over him, but that he doesn’t run from demons, he just beats the shit out of them.

He concluded by saying that he is going on a pilgrimage in 2022. He thanked everyone who supported him and he plans on grabbing pro wrestling by the balls in 2022 because he is truly free.

Moxley, 36, is married to Renee Pacquette, who was a broadcaster for WWE under the name Renee Young. The two welcomed their first child, daughter Nora, last June.