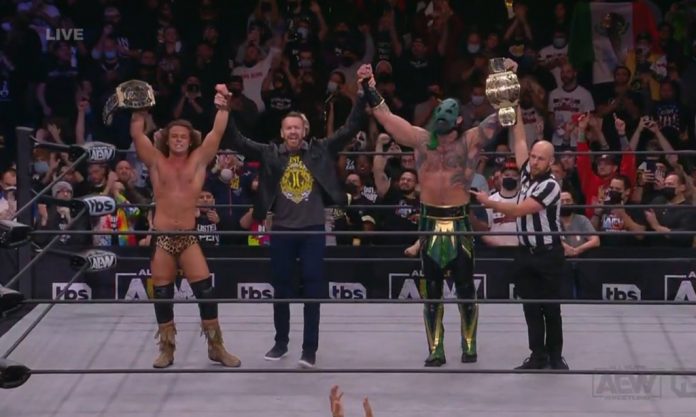 The first episode of AEW Dynamite on TBS saw the Lucha Bros put their tag titles on the line against Jurassic Express.

Both teams gave it their all, but the momentum in the match permanently flipped in Jurassic Express’ favor when Luchasaurus slammed Fenix through a table. Fenix landed quite badly on his arm, and he was a non-factor for the rest of the bout.

At the end of the match, Alex Abrahantes set up a table at ringside, although it was Luchasaurus who put Rey Fenix through the table. Jungle Boy then pinned Penta El Zero Miedo to win the match for his team.

It was all heart and no quit, and now @boy_myth_legend and @luchasaurus are your new #AEW World Tag Team Champions! What a historic night here at #AEWDynamite on @TBSNetwork! pic.twitter.com/lsHyX8wOnP