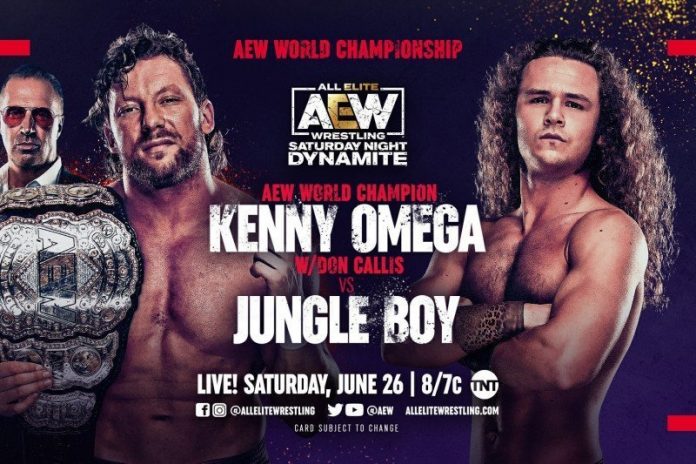 Kenny Omega put his AEW World Championship on the line against Jungle Boy in the main event of this week’s AEW Dynamite.

Before the match can even start, Gallows and Anderson and Luchasaurus and Marko are kicked out as Don Callis joined the announcers on commentary.

Omega starts the match by dominating his Jungle Boy. After a while, Jungle Boy hits Omega with a flurry of punches and kicks. Kenny Omega catches Jungle Boy on his shoulders, but he drives Omega to the corner and hits an armdrag followed by a dropkick to the outside. He is dragged out by Omega and the match continues on the outside.

At the end of the match, Jungle Boy was able to lock in the Snare Trap for a second time but Omega grabbed Jungle Boy’s hair to break the hold. Omega and Jungle Boy head to the top and Omega slips under, bringing Jungle Boy down face-first on the top turnbuckle. Omega with a big v-trigger to the back of the head, but Jungle Boy kicks out. Omega pulls him right up, one winged angel, cover, and its over. Omega retains the title.

After the match, Christian Cage prevented Omega from delivering another blow, but ultimately fell victim to an attack by Matt Hardy and Private Party, and a double superkick from The Young Bucks.

Wait what is happening?! #AEWDynamite pic.twitter.com/41q5n2weKI