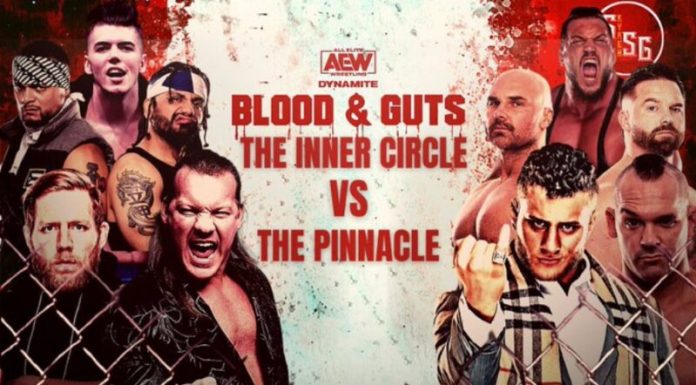 Just before the COVID-19 pandemic began, AEW had its first Blood & Guts Match booked for early 2020 between The Inner Circle and The Elite. That match had to be canceled due to the pandemic.

A year later, the match will see The Inner Circle take on The Pinnacle (MJF, FTR, Wardlow, and Shawn Spears) and will take place on the May 5th edition of AEW Dynamite, which also carries the Blood and Guts theme.

The 5-on-5 battle draws inspiration from NWA’s WarGames match, which is contested inside of two rings, which are encapsulated by a single, large steel cage. Entrants are staggered based on which team wins the pre-match coin toss until all wrestlers have entered the cage. Once both sides have all their members in the ring, the match begins, and can only be won by submission, “surrender,” or knockout.