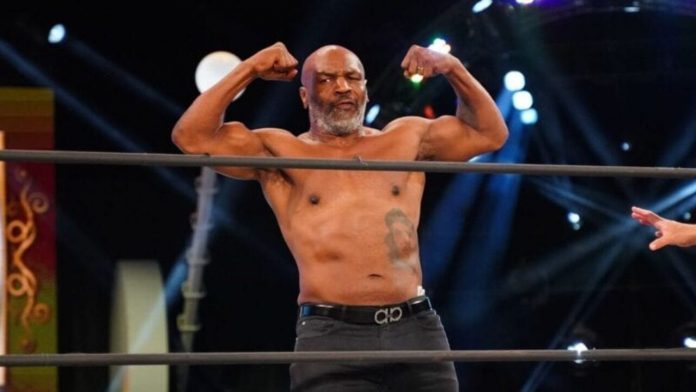 Mike Tyson made his return to AEW tonight on AEW Dynamite.

Early in the show Chris Jericho and The Inner Circle cut a promo on MJF and The Pinnacle and challenged them to a Blood & Guts match. The Pinnacle responded by attacking Chris Jericho backstage while the rest of the group was locked in their dressing room.

The beat down eventually spilled out into the ring, where Iron Mike’s music hit and Tyson ripped off his shirt and entered the squared circle. He proceeded to go after The Pinnacle and hit Shawn Spears with a flurry of strikes in the corner before the rest of the Inner Circle hit the ring. After the Pinnacle fled, Jericho and Tyson shook hands.

It was later announced that on next week’s Dynamite, Tyson will return as a Special Ringside Enforce for Dax Harwood (with Cash Wheeler) vs. Chris Jericho (with Sammy Guevara). All other Inner Circle and The Pinnacle members are barred from ringside.

Why would you EVER try to square off against @MikeTyson?! #AEWDynamite pic.twitter.com/PGLIX91Nh7