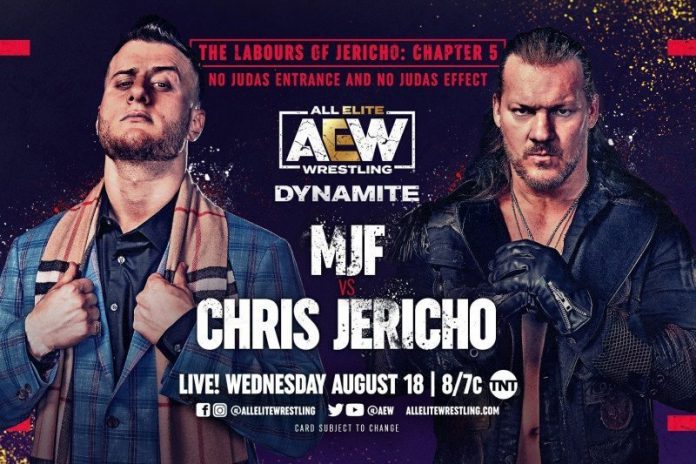 After beating Shawn Spears, Nick Gage, Juventud Guerreo, and Wardlow, Chris Jericho gets to finally face the man himself, MJF.

As Jericho enters the arena for his 5th labor, the crowd sings Judas for Jericho as he comes out without the music. Per the stipulation, Jericho was not allowed to walk out to his theme song and he could not use the Judas Effect.

Awesome job, Houston! An incredible a cappella rendition of #Judas for @IAmJericho’s entrance against @The_MJF.

As the match started an early onslaught put MJF on the defensive but the younger star downed his opponent and worked over his injured left arm during the break.

Late in the match, Jericho gets the sleeper hold on MJF, but MJF gets the low blow and puts on the Boston Crab. Jericho manages to crawl to the ropes. At this point, MJF gets the knuckles but the referee sees him takes them away. Meanwhile, Jericho gets a baseball bat and hits MJF in the midsection. Jericho goes for the Judas effect but remembers midway that he can’t use it. MJF then hit his own Judas Effect and then forced Jericho to tap out to the Salt of the Earth submission.

A soul-crushing loss for @IAmJericho to @The_MJF on #AEWDynamite. We will never hear the end of this. pic.twitter.com/Lh7VSr5QKL