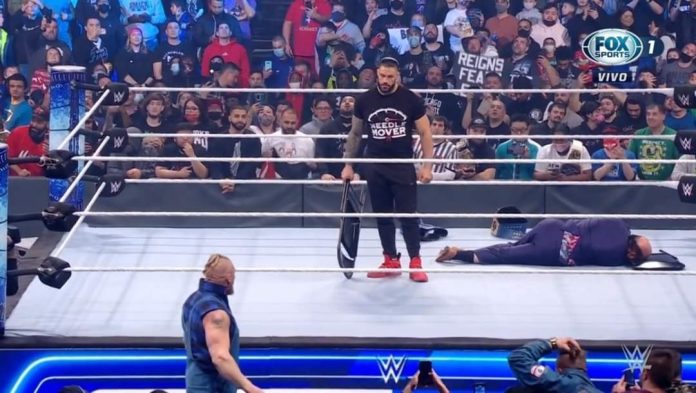 Roman Reigns returned to SmackDown on Friday night from the Allstate Arena near Chicago in Rosemont, Illinois.

Paul Heyman slipped up on last week’s episode of SmackDown, referring to Brock Lesnar as a viable future Universal champion.

On tonight’s show, the Tribal Chief said that Heyman isn’t the same. He asked Paul if he knew Brock Lesnar would be at SummerSlam or Madison Square Garden. “Why are you protecting Brock from me?” Heyman, fighting back tears, admitted he’s not protecting Lesnar from Reigns, but vice versa.

Reigns hugged Heyman and told him, “I love you wise man and I thank you for your honesty.” He then went on to fired Heyman and hit him with a Superman punch.

Before he could do any further damage to Heyman with a steel chair, Brock Lesnar made the save, destroying out The Usos and delivering two F5s to Roman to close out the show.