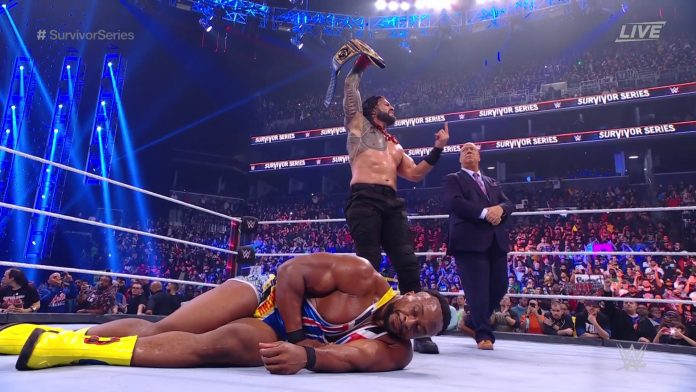 After weeks of building tension and brutal attacks, universal champion Roman Reigns and WWE champion Big E finally got their chance to clash in singles action at Survivors Series.

After some strength tests won by Big E, Reigns got the early advantage. Big E then took control of the match and he hit Reigns with clubbing forearms to the chest.

Reigns then took Big E outside the ring, throwing him into the barricade before Big E was finally able to reverse an Irish whip to send Reigns into the ring steps. Big E hit a series of belly-to-belly suplexes before Reigns managed to hit a Samoan drop to slow things back down.

Late in the match, Reigns hit Big E with a Superman punch but Big E only went down to one knee before firing up back to his feet. Roman then hit him with another Superman punch but Big E did the same again. Big E then sidestepped another Superman attempt but Reigns hit the Rock Bottom and he followed up with a pin attempt. The fans began to cheer “Rocky” after the Rock Bottom.

Big E managed to hit the Big Ending but Reigns grabbed the bottom rope. Outside the ring, Big E continued the attack around ringside and the barricade. Reigns then jumped off the ring steps to hit a Superman punch. The action got back into the ring and Big E tried for the Big Ending again but Reigns slipped out, stomped Big E’s knee and hit one final spear to pin Big E and win the match.