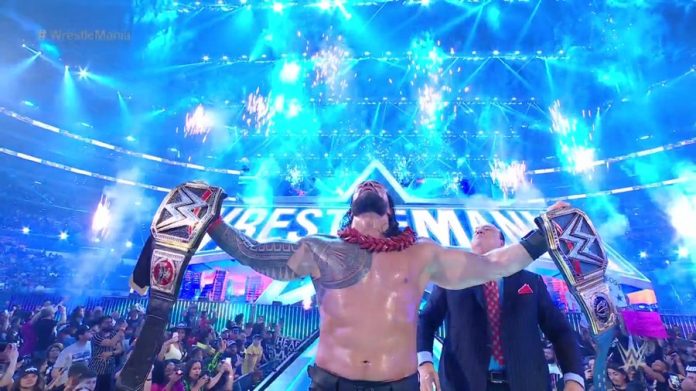 The main event of WWE WrestleMania 38 was WWE Universal Champion Roman Reigns facing off against WWE Champion Brock Lesnar in the “the biggest Wrestlemania match of all time” Winner Take All Unification Match.

This match marked the third time Reigns and Lesnar headlined WrestleMania against each other, and Reigns came out on the losing end each of the previous two times.

Before the match, Reigns got on the mic and told Wrestlemania to acknowledge him. Paul Heyman did the introduction for Reigns. Lesnar ended up doing his own introduction that had the Dallas crowd wild.

As the match started Lesnar removed his MMA gloves once the bell rang, looking to go bare-knuckle with Reigns. Lesnar took the fight right to Reign, picking him up and driving into the opposite corner before sending him across the ring with multiple overhead belly-to-belly suplexes.

At the end of the match Reigns hit two more spears but Lesnar grabbed Reigns’ arm on the second and locked in a kimura. Reigns, deep in pain, crawled toward the ropes and Heyman pushed the rope forward so Reigns could grab it to break the hold. Brock went for the F5 but Roman slipped out and hit the spear and he pinned Brock to unify the Titles.

Head of the Table Energy. #WrestleMania