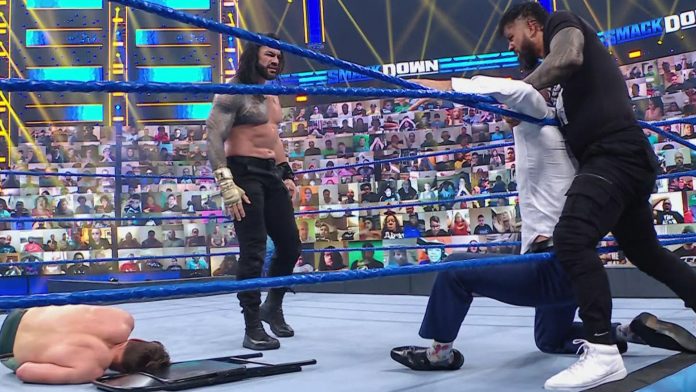 Roman Reigns and Daniel Bryan went to battle in the main event of Smackdown in an epic clash that was one of the best matches to be shown on WWE weekly television in a long time.

The match, which had huge implications for both men. Reigns was ultimately able to survive the battle with Bryan, scoring a submission to retain his championship and launch Bryan from the SmackDown locker room.

It was the actions of Reigns after the match, however, that may have the biggest effect on the future of the brand. The Tribal Chief added insult to injury and proceeded to pull out a chair.

Reigns went to continue his assault when Cesaro ran in and blitzed Reigns with a series of European uppercuts. Jey Uso then took out Cesaro with a superkick before dragging him into the ring and tying him up in the ropes, forcing him to look on as Reigns hit Bryan with a con-chair-to before the show went off the air.