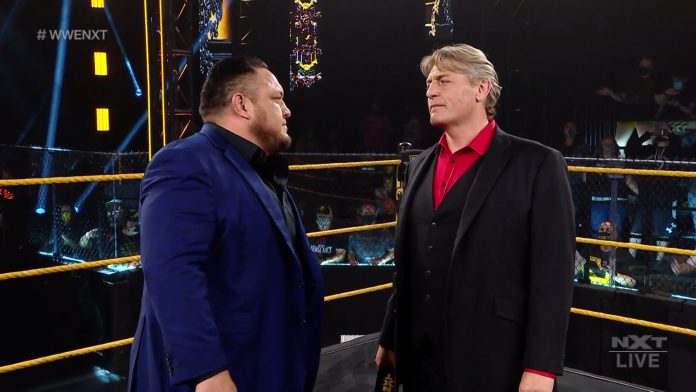 Samoa Joe has returned to WWE’s black and gold brand.

On tonight’s opening segment of NXT, William Regal opened up the show talking about the NXT’s history. Before he could announce he was stepping down, Regal was interrupted by NXT Champion Karrion Kross and Scarlett.

Kross spoke down to Regal wanted Regal to quit. Before William Regal could respond, Samoa Joe’s music hit, and the Samoan Submission Machine made his way to the ring.

Joe briefly confronted NXT champion Karrion Kross before resisting William Regal’s overtures to take over as the promotion’s next general manager. Joe declined and offered a counter proposal as he would ensure that Regal could do his job, serving as a general enforcer for Regal to bring a little more order backstage.

For the time being, Joe is serving as a general enforcer and can’t make contact with an NXT talent unless provoked, but when provoked, he can dish out punishment.

“Joe, I want you to be the new General Manager of #WWENXT.” – @RealKingRegal

“I can tell you without a shadow of a doubt, ABSOLUTELY NOT.” – @SamoaJoe