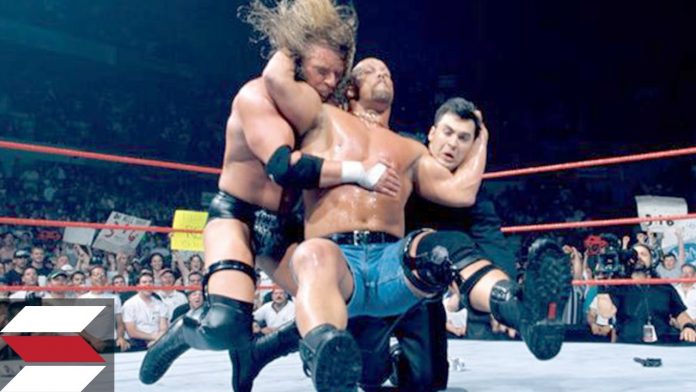 There’s nothing like the spectacle of professional wrestling. With all the gimmicks, the athletics, the storylines – it’s all just the best. What’s also awesome are the wrestler’s finishers. A wrestler’s finisher says so much about them. Try to imagine Shawn Michaels without the superkick, The Rock without his Rock Bottom or Stone Cold without his Stunner.

Now lets take a look at the top 5 best finishers in wrestling history. We ranked the top 5 that would’ve made Jim Ross shout, “Good God, almighty!”

Used by Goldberg, The Jackhammer, is considered to be one of the most destructive finishers in professional wrestling history. Goldberg would grip his opponent in a suplex-like hold. He would then lift them in the air and hold them there for a couple of seconds. Then he would bring them down into an almost a powerslam maneuver, driving them through the canvas for the pin.

The time he hit the Jackhammer on a then-550 pound Giant is one of the most impressive moments in professional wrestling history.

Used by The Undertaker, the Tombstone Piledrive is the definition of iconic. It has downed hundreds of fallen competitors while defining both a legendary career and the ultimate Streak.

Very rarely did anyone kick out of the Undertaker’s signature move. While The Dead Man had other destructive finishing moves like The Chokeslam, The Last Ride, and Hell’s Gate, he always returns to his faithful piledriver to finish his victims.

Used by Randy Orton and Diamond Dallas Page, this awesome finisher can be hit from multiple angles and from seemingly OUT OF NOWHERE.

The move is a lightning-quick front face neckbreaker that has ended many matches in a split second. Orton first stalks his foe, waiting, in a four-legged stance, for his stunned opponent to rise into position. Orton would then dart forward and grab his opponent by the head, before dropping to the canvas, smashing his opponent’s chin off of the ground.

Bret “Hit Man” Hart’s Sharpshooter is simply one of the coolest moves in the history of wrestling. It’s the move that made “Stone Cold” Steve Austin a household name and ended almost all of Bret’s matches. Once the Sharpshooter is locked in, your options are limited.

While Bret Hart is the wrestler with whom the Sharpshooter is synonymous, it was actually Sting who first popularized the move while wrestling for WCW. Called the Scorpion Deathlock, Sting used the move as his submission finisher throughout his career.

Used by Stone Cold Steve Austin, all it took was a simple kick to the gut to make it clear that mayhem was about to happen. No move has ever been as sudden, chaotic and vicious since.

Stone Cold hit it on everyone, from championship contenders to presidential candidates. Any time you were face-to-face with Austin, you had to worry that a kick to the gut was coming, followed by a Stunner. And that’s the bottom line.