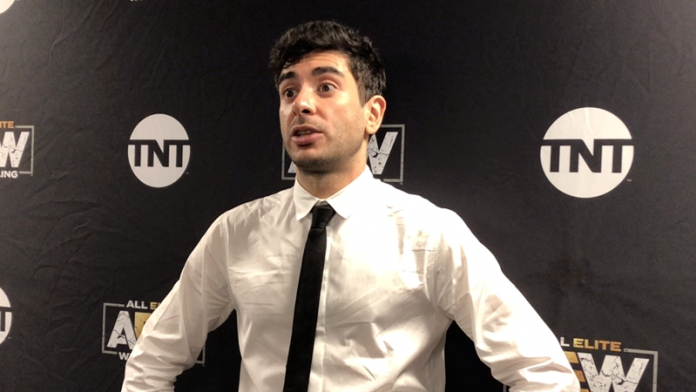 AEW set the wrestling world buzzing today with the announcement of a third hour of weekly programming with a show called AEW Rampage. That new show is set to debut Friday, August 13 at 10 pm on TNT.

AEW president Tony Khan appeared on Busted Open Radio later in the day and gave a few more details about the show. Khan said that the move from TNT to TBS included very fair financial considerations and also hyped the idea of quarterly supercards to air on TNT. The most intriguing tidbit to my ear was Khan promising that Rampage will be a core property equivalent to Dynamite.

“They asked at one point if I wanted to do three hours of Dynamite when it came up about doing a third hour,” Khan said. “And I said I really believe in doing it on another night. This time slot, I think, is really good for the fans to keep a great night of wrestling fresh on Friday nights. And, so, at 10 pm, you’re going to have a great option to come watch Rampage.

“And I promise Rampage isn’t going to be a secondary show,” he continued. “Rampage is going to be the partner of Dynamite, the equivalent to Dynamite. We have these two strong franchises Dynamite and Rampage, and they are our weekly core properties. And then we’ll have our peripheral properties, they’re probably the equivalent of what you would have seen partially a developmental show, partially a syndicated show. And I think that’s what you’ll get on Elevation and Dark. But for Rampage and Dynamite, those will be our core properties on TNT the rest of this year.”

“I didn’t wanna do 3 hours of Dynamite…it came up about a 3rd hour & I said, ‘I really believe on doing it another night’.”