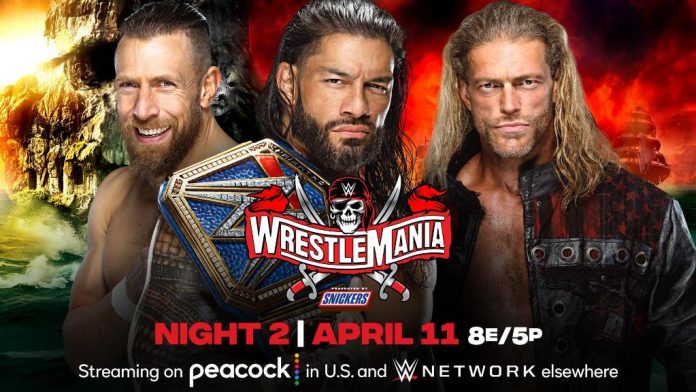 WWE made a big change to WrestleMania this year, and it all went down on this past Friday Night SmackDown.

Daniel Bryan returned after a controversial finish to the Universal Championship match at Fastlane, which saw him make Roman Reigns tap before being attacked by Edge.

To open the show, Daniel Bryan made his way down to the ring and refused to leave until he was granted a rematch at WrestleMania.

WWE Official Adam Pearce told him that a title match could not be sanctioned so close to WrestleMania. Bryan even proposed to face the winner of the match between Edge & Roman provided they face-off on the night 1 of the show.

Edge came out and ridiculed Bryan for trying to get inserted into the WrestleMania match. This led to a brawl between Bryan and Edge. During the closing segment, Pearce came out and he was followed by Roman Reigns, Edge, and Daniel Bryan. Pearce said he understood everyone’s points, but he had a decision to make.

He then said at WrestleMania for the Universal Championship that the three of them would compete in a Triple Threat match.

The announcement was followed by a brawl between the three with Edge standing tall as he rained down on Bryan and Roman with a steel chair and even attempted the chair-con-to.