Wardlow wins the Face of the Revolution Ladder Match 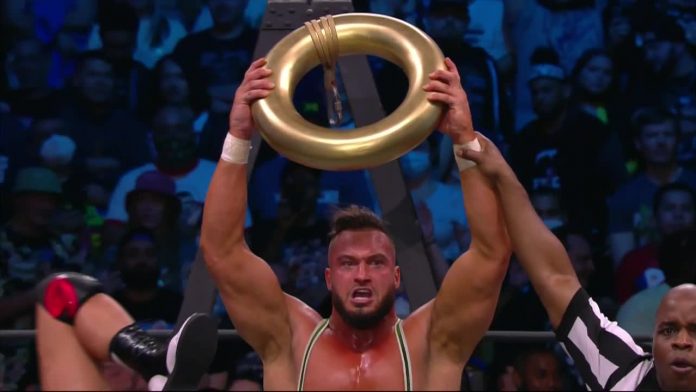 The third match second match of AEW Revolution was the Face of the Revolution Ladder match featuring Wardlow vs. Keith Lee vs. Powerhouse Hobbs vs. Christian Cage vs. Ricky Starks vs. Orange Cassidy. The winner gets a TNT Title shot.

Christian Cage was the first to involve a ladder, going right at Lee, Hobbs and Wardlow, trying to take out the match’s three powerhouses. Cage then hit a reverse DDT to Hobbs.

Everyone had plenty of moments in the match to shine and use their creativity. Cassidy especially showing moments of innovation, including skinning the cat while suspended from a ladder held in the air by Wardlow and Lee and nearly grabbing the suspended brass ring to win the match.

Towards the end of the match, Wardlow and Hobbs ripped a ladder in half, Wardlow managed to knock the other two off the stage and through a table below.

Starks then nearly had the match won when Danhausen jumped in the ring to interfere, knocking him from the ladder. Starks got back in and pulled Christian off the ladder and Wardlow powerbombed Christian. Wardlow then hit Starks with a powerbomb off of one ladder onto another before grabbing the ring to win the match and earn his title shot.

Will @RealWardlow be the #FaceOfTheRevolution after this violent Ladder Match? #AEWRevolution is LIVE on PPV! Available on @BleacherReport & @FiteTV (Int.)! pic.twitter.com/OZkZ5rWI3Y