Watch – The War of Words Between the Pinnacle & Inner Circle 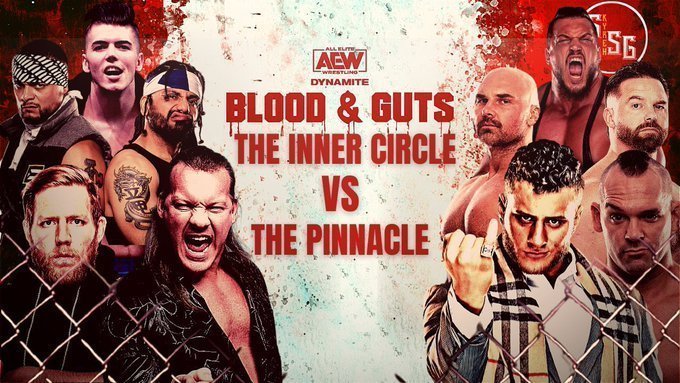 Just a week before the highly-anticipated Blood and Guts event, the Inner Circle and the Pinnacle came face-to-face on AEW Dynamite to discuss the terms of their match, set for May 5, 2021.

Shawn Spears kicked off the segment by warning Sammy Guevara, telling him that Chris Jericho will ruin his career. In response, the Spanish God slammed Spears by calling him a failure, agreeing to give Pinnacle the advantage for their upcoming clash, before vowing to beat every member of the heel group next week.

Jericho then criticized MJF for trying to take his spot in wrestling, claiming that the spot is earned by hard work, rather than taken by force. Jericho reminds MJF that at 25 he might have been curtain jerking it in WCW, but he was also main eventing shows in Japan and Mexico, which is what put him at the top.

Jericho talks about a family, says he’s been family with his guys since day one. He says MJF will not get in the middle of Inner Circle, and they won’t beat Inner Circle. They are going to have to kill the Inner Circle.

MJF: “As a gentleman, I’d like to thank Chris Jericho. Without you, there is no AEW. You were the top guy, the draw, the bridge for the lapsed fan. And all the while you managed to create the best group in pro wrestling, the Inner Circle. I’ll give that to you. However, Chris, I can’t imagine the pressure you must feel. ‘Cause let’s face it, man, every time you come out here, if you don’t hit a homerun, you’re taking food out of everyone’s mouth in this company. You look exhausted, Chris. You don’t have to worry anymore, Chris, because come next week at BLOOD AND GUTS, I’m going to take that heavy burden of a crown off your head. And the Pinnacle will take its place at the top of the mountain. When I look down at your mangled body after BLOOD AND GUTS, I will once again say ‘thank you.’”

Chris Jericho: “How do you think you can inherit a spot just because you want it? It doesn’t work that way. You want a spot? You’ve gotta earn it. At 25 years old, I headlined arenas in Japan and Mexico and that’s where I learned respect. If you want my spot, a good place to start earning it is at BLOOD AND GUTS. You want to talk about a family? The Inner Circle is a family, part of AEW since Day 1. You’re going to have to kill us to make us surrender. And when that doesn’t happen, we’re going to step on you like the pile of crap you are. If 1969 was the Summer of Love, 2021 will be the Summer of Pain for the Pinnacle. And next week at BLOOD AND GUTS, summer starts early for you!”