Who Stole Cleopatra’s Eggs from Vince McMahon at Survivor Series? 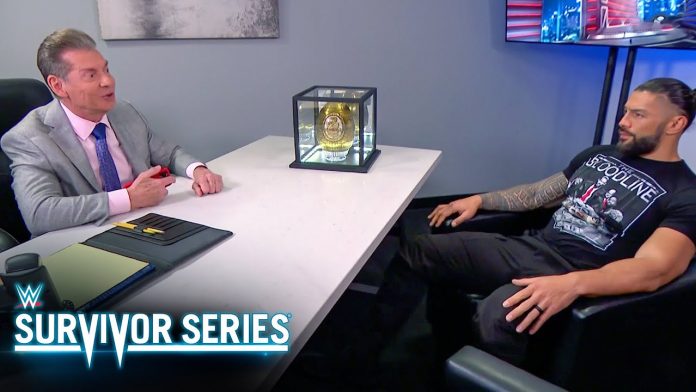 WWE Chairman & CEO Vince McMahon appeared in several segments at Sunday’s Survivor Series event, first coming out of his limo during the Kickoff pre-show in a backstage segment.

McMahon arrived at the arena while Adam Pearce, Sonya Deville and the roster waited for him. Vince hopped out of the SUV and revealed Cleopatra’s golden egg from Dwayne “The Rock” Johnson’s new Red Notice film on Netflix, which was the main sponsor for the pay-per-view.

Vince later appeared in his backstage office, with Cleopatra’s golden egg on display on his desk as Roman Reigns came into the office. Vince wanted Reigns to see the egg, which he said was given to him by Reigns’ cousin, The Rock. Vince went on about how the egg is worth $100 million.

Later in the show McMahon would once again appear in another office segment with Deville and Pearce, where he would notice that Cleopatra’s golden egg was missing from the display case on his desk.

Vince ordered Deville to go call the police, while speculating with Pearce on who could’ve stolen the egg. McMahon revealed that he would be gathering the entire Raw and SmackDown rosters on Monday Night Raw to find who stole the egg.