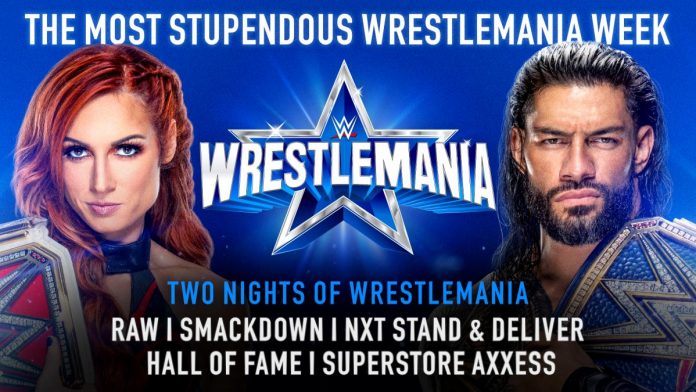 WWE has announced a list of events for WrestleMania 38 week, returning to a full slate of in-person events surrounding its most important show of the year.

The Hall of Fame ceremony, NXT Stand & Deliver PPV, episodes of RAW and SmackDown, and a “Superstore Axxess” interactive fan experience have all been announced to take place during the same week as WrestleMania 38.

All of these events will take place in the Dallas area, however, times, locations and ticket information for the week’s additional events are yet to be determined.

There has not been a traditional Hall of Fame induction ceremony since 2019 and last year’s NXT Stand & Deliver event took place at the WWE Performance Center. This will be the first NXT event to take place outside of Florida since the start of the pandemic.

The Showcase of the Immortals is set for April 2 & 3 at AT&T Stadium in Arlington, Texas. When AT&T Stadium hosted in 2016, the show had a record crowd of more than 101,000 fans and generated $170.4 million in economic impact for the Dallas-Fort Worth area.