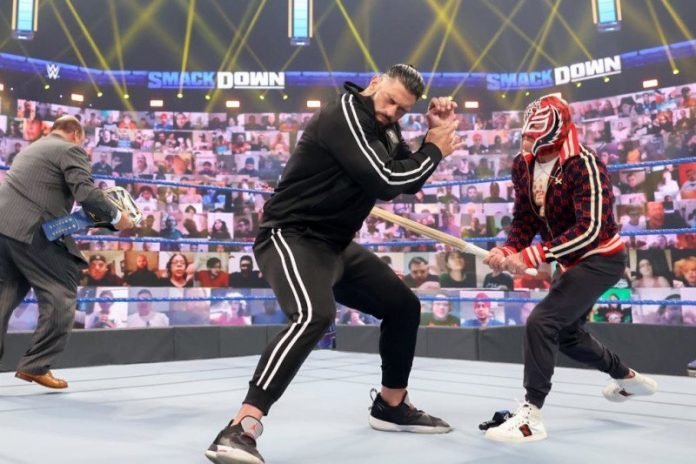 WWE Universal Champion Roman Reigns and challenger Rey Mysterio were set to battle at Sunday’s Hell in a Cell pay-per-view, but it appears that match will occur on Friday Night SmackDown instead.

This comes after Mysterio tweeted that he could not wait until Sunday and he wanted the Cell match on Friday.

It’s eating me up inside. I can’t wait any longer. I want the Hell In A Cell match tomorrow night. @WWERomanReigns @HeymanHustle

Reigns later responded and accepted the date change. “Sunday. Friday. Any day. Makes no difference to me. It’ll be my pleasure to disgrace what’s left of your family name tomorrow night inside Hell in a Cell! My Special Counsel @HeymanHustle will handle the paperwork. I’ll PERSONALLY handle the warfare!@WWE #Smackdown”

Dave Meltzer reported in the latest edition of the Wrestling Observer Newsletter that there’s “no involved reason that made any sense” as to why the date was changed and he was told, “there were just a bunch of discussions on Thursday.” Those discussions ended with “let’s do it on SmackDown.”

As it stands right now, Reigns is not scheduled to wrestle at Hell in a Cell.