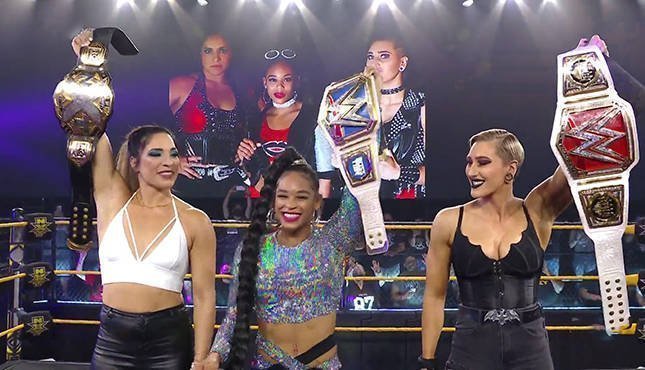 This week’s show marked NXT’S first episode on Tuesday nights. The show brought in a considerably larger audience at 805,000 viewers with a 0.22 rating in the target demographic.

This is NXT’s biggest audience since October 28, which was the Halloween Havoc show that drew 876,000 viewers with a 0.25 rating in the 18-49 demographic.

WWE NXT moved back to Tuesday nights this week after airing on Wednesdays from September 18, 2019, through April 7. This marks only the 10th time NXT has been able to top 800,000 viewers since arriving on USA.

This viewership is up 4.82% from last week’s show, which drew 768,000 viewers for the Takeover Night One episode. This week’s show was highlighted by Kushida winning the NXT Cruiserweight Championship, MSK successfully retaining their tag titles, Franky Monet making her debut and Raquel Gonzalez celebrating her NXT Women’s Championship victory alongside Rhea Ripley and Bianca Belair.